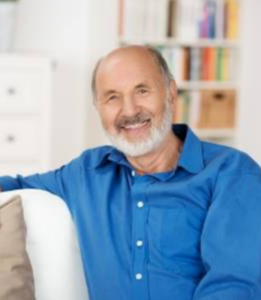 This week we are continuing with our microcurrent case study series. This is a true account of a patient who harnessed the power of microcurrent to finally treat CRPS, an often life-long condition. We have changed the name and details of this patient to respect his privacy.

Bill is 63 years old and had been exceptionally fit and active his whole life. He participated in martial arts, scuba diving, riding motorcycles, hunting, and sculping. He and his wife, Mary, were living a comfortable life together, planning home renovations and other future goals. This was until Bill’s health took a turn for the worse.

Years ago, Bill had broken his finger. Multiple surgeries, numerous pins, and a slow recovery resulted in the development of CRPS, or complex regional pain syndrome. According to the National Institute of Neurological Disorders and Stroke, CRPS is believed to be caused by damage to the peripheral and central nervous systems. CRPS symptoms are marked by prolonged or excessive pain, changes in skin color, and swelling of the affected area.

As his condition progressed, Bill started noticing debilitating changes in his mobility. He was unable to use his left hand and suffered intense spasms shooting down his arm. The use of his arm became difficult, unable to lift it above his shoulder.

Normal activities like making a fist, holding things, opening jars, opening doors and driving became impossible. Bill described his pain to us as “a thousand hornets stinging all at once and without stopping”.

Due to his lack of mobility and constant pain, Bill was unable to continue working as a salesman. Depression set in, and he wondered, “How will I ever recover from this?”.

After losing his job, Bill experienced many changes in his life, none of them positive. Living in constant pain shifts the entire dynamic of a relationship; Bill and Mary were no exception. They had to cancel their home renovations, and they stopped participating in the activities they shared. As their focus narrowed on his condition, less time was spent nurturing their relationship, creating tension in their marriage.

To add to the mounting stress, both Bill and Mary were having difficulty sleeping as he would constantly wake throughout the night. Mary shared her feelings of hopelessness surrounding the situation. “I was beside myself as to what to do for my husband whom I was watching fade away in front of my eyes.” At one point, Bill had even shared with Mary that he didn’t want to live anymore because he felt the pain was sucking the life out of him.

Conventional Treatments with No Results

These shocking revelations sent Bill and Mary on a search for relief from the relentless pain of CRPS. In conventional medicine, CRPS treatment focuses on management, not resolution. Bill’s doctors assured him CRPS was a life-long condition with no cure. He was disappointed to learn the only treatment they could offer him was a high dose of medication in hopes of simply managing the pain.

The conventional treatment plan consisted of a heavy dose of strong medications that included Oxycontin, Gabapentin, Pregabalin, Tramadol, Amitriptyline, and Codeine. The pills lead Bill to feel disassociated and out of touch with reality, adding to his sense of despair and confusion.

Bill reported the pharmaceuticals didn’t eliminate the pain; they only took the edge off. All the while, his health deteriorated further as the symptoms started advancing in frightening ways. Bill noticed further aching, swelling, and discoloration in his arm coinciding with muscle wastage. This is when he and Mary buckled down and really started to explore all the options, including natural and holistic treatments.

Mary had always been interested in health and wellbeing, reading about microcurrent long before Bill’s diagnosis and resulting health problems. They discussed the possibility of purchasing a microcurrent device but thought “what if it doesn’t work?” With uncertainty in the air, Mary proposed this important question: “how much does this pain mean to you in terms of money?” This put the problem into focus for Bill and he agreed to give microcurrent therapy a shot.

Bill and Mary bought an Avazzia Med-Sport and started using it right away. After some trials and tribulations, they realized the device they chose didn’t offer the proper frequency needed to treat CRPS pain. Mary understood she may need more advice and guidance on how to properly implement microcurrent therapy, so she signed up for a class with Dr. John Hache.

After the class, Dr. Hache consulted with Mary and recommended she upgrade to the Pro Sport 3. The Avazzia Pro Sport 3 offers the important Alpha frequency, which has been found to be successful in treating CRPS. Full of hope and slightly unsure, Mary put in an order for an Avazzia Pro Sport 3 device and a Sana Therapeutics Health Blanket.

Note: As an aside, the New Avazzia Life Evolution model contains the frequencies used in this case that once were only contained in the Pro-Sport 3 device – and its less than half the price!

The Moment of Truth

Armed with confidence, knowledge, hope, and the proper tools, Mary set out to relieve her beloved husband from the debilitating pain of CRPS. Excited and reinvigorated, Bill and Mary once again bravely set out on the important work of healing.

Each day Mary would wrap Bill in the Healing Blanket and administer microcurrent therapy to him. She administered the sleep protocol in conjunction with the PEMF Qiwave pad at night for maximum results. Roughly 5 days later, the sleep protocol began to work like magic, allowing Bill and Mary to once again benefit from the restorative benefits of uninterrupted sleep. They began to look forward to the evenings, a time to slow down and focus on healing and connecting again in a profound way.

Their routine continued for 9 months, at which point Bill reported his pain was decreasing in strength and frequency. He would enjoy weeks at a time free from pain, and when it would return it was notably weaker. The stretches of pain-free time got longer and longer until one day Bill noticed the pain wasn’t returning. Bill’s CRPS had disappeared!

With Bill’s CRPS now gone, he has full use of his hand and arms, and he is back to sleeping like a baby again. Bill is currently working on regaining his strength by getting back into his wood and stone carving. Mary has gone on to treat many of her friends and family members with the Avazzia Pro Sport 3, providing amazing results.

We asked Mary if she thought microcurrent was a turning point in Bill’s recovery and she answered with a resounding “YES, without a doubt. It took a while, but we kept going and learning and asking questions. The support from John and Rob is amazing.”

Healing is a Team Effort

The love and support of your family is such an important facet to healing. Mary never gave up on Bill, even in his darkest days. She pushed through when he was too weak or discouraged and advocated for him when conventional treatment wasn’t working.

We pick up where familial support ends with the scientific and medical background required to guide you in achieving your treatment goals effectively and naturally. If you would like to learn more about how microcurrent can help you break free from the limitations and struggles associated with chronic pain, we invite you to reach out! We would love to one day share your story of healing as a source of encouragement and inspiration for others.

If you’re new to all this, and would like to learn more, send us an email at Support@PainFreeForLife.com, or book a complimentary call at www.PainFreeConsult.com